ASTROHN Technology Ltd. and MRTI RAS will be improving the inspection equipment

ASTROHN Technology Ltd. and MRTI RAS will be improving the inspection equipment

In 2020, employees of ASTROHN Technology Ltd. and MRTI RAS JSC took part in a series of meetings. Today ASTROHN Technology Ltd. holds one of the leading positions in the development and implementation of advanced security technologies and innovations in Russia, and have already implemented many technical solutions in projects to protect the infrastructure of critical facilities. The long-term experience of MRTI RAS in the development and operation of charged particle accelerators has made it possible to develop effective industrial inspection equipment for baggage and cargo to identify any unauthorized items (weapons, explosives, drugs).

The participants discussed the possibilities and fate of BRIG biplane two-level X-ray inspection unit, developed by MRTI RAS. It is designed for inspection of baggage and hand luggage. It automatically determines the effective atomic number and physical density of the substance of individual fragments of the inspected cargo, which makes it possible to identify explosives and narcotic substances with high accuracy. At the time of its creation, the unit was one of the most advanced prototypes of inspection equipment. It is no coincidence that, according to the test results, BRIG-1M became the only US FAA-certified Russian inspection complex. 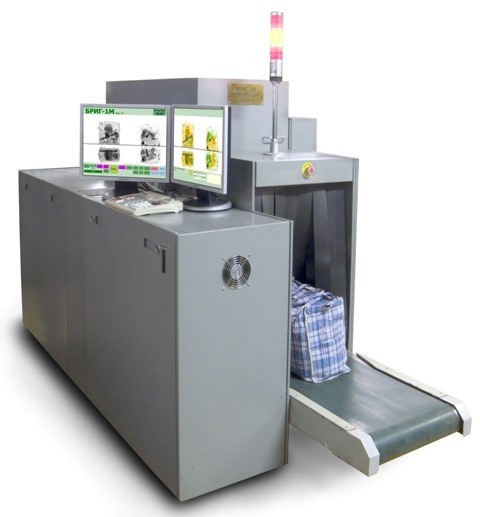 The essence of the method is a dual-spectrum X-ray mode. In this case, the X-ray inspection is performed in two mutually perpendicular geometric projections, which allows for a mutual quantitative comparison of the mass thickness of the content in one of the projections with the value of the linear size of this content in the other projection and, from their ratio, determine the density of the substance. The substance is determined by its effective atomic number and density. A pair of measured physical parameters (effective atomic number and density) is automatically compared with the database of these physical parameters for a number of household and hazardous substances and, if they match, the name of the substance, the value of its effective atomic number and density value are displayed on the monitor screen. This method of determining reliably distinguishes the substance in the inspected baggage from the most common explosives, which is a consequence of the higher density of explosives compared to the densities of most household organic substances. For example, the density values of such household organic substances as plastics, leather, soap, items made of woolen, cotton, synthetic fabrics are no more than 1.2 g/cm3, when, like most common explosives, the density value exceeds 1.4 g/cm3. A black and white shadow image is displayed on the left screen. A color image is displayed on the right screen. The vertical projection (side view) of the inspected object is placed in the upper part of the working screen. The horizontal projection (top view) of the inspected object is placed at the bottom of the working screen.

The meeting participants unanimously concluded that the method is extremely promising, but the processing of the search results requires a radical modernization. The challenge is to interpret this information through modern modeling. Recently, the so-called “deep” learning methods have replaced traditional machine learning algorithms in many applications. Neural networks endure good results when it comes to pattern recognition. From the huge number of processed samples, the software will independently determine the appearance of suspicious items. Deep learning provides decisive advantages in the development of security software. This method not only achieves high detection quality but is also particularly attractive because the results are automatically generated. Already in the medium term, progress in the field of massive parallel computing will allow the upgraded Brig unit to radically increase the speed and accuracy of identifying explosives in baggage, and the inspection itself will not interfere with the movement of passengers.

Based on the results of the meetings, a number of minutes were signed and a cooperation agreement is being prepared.

ASTROHN Technology Ltd. and MRTI RAS will be improving the inspection equipment 16.12.2020

Magadan is being armed with ASTROHN thermal imager 09.12.2020